The history of tea

It all began in 2737 BC in China. According to legend, whilst the emperor Shen Nung was boiling water to slake his thirst in the shade of a tree, a light breeze rustled the branches and caused a few leaves to fall. They mixed with the water and gave it a delicate colour and perfume. The emperor tasted it and found it to be delicious. The tree was a wild tea plant: tea was born. 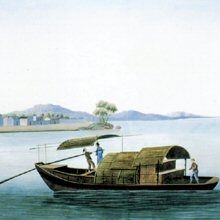 In India, another legend tells of how Prince Dharma was touched by Divine grace and went out to preach the teachings of Buddha in China. To make himself worthy of such a mission, he vowed never to sleep during the nine years of his journey. Towards the end of the third year, however, he was overcome by drowsiness and was about to fall asleep when by chance he plucked a few leaves from a wild tea plant and began to chew them. The stimulating qualities of tea immediately had their effect; Dharma felt much more alert and thereafter attributed the strength he found to stay awake during the six remaining years of his apostolic mission to these leaves.

In Japan the story goes a little differently: after three years Bodhi Dharma, exhausted, ended up falling asleep while he prayed. On awaking, infuriated by his weakness and devastated by his sin, he cut off his eyelids and threw them to the ground. Some years later, on passing the same spot, he saw that they had given birth to a bush that he had never seen before. He tried the leaves and discovered that they had the property of keeping a person awake. He told the people around him about his discovery and tea began to be cultivated in all those places through which he travelled.

Legends aside, it seems that the bush was originally from China, probably from the region around the border between north Vietnam and Yunnan province, and that the drinking of this beverage was first developed by the Chinese.

During the Chinese Tang Dynasty (618-907 AD) the drinking of tea evolved into a more popular pastime, moving away from the realm of pharmacology and becoming a refined part of everyday life. 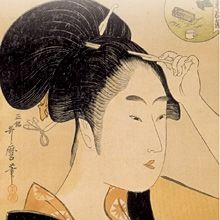 Teahouses came onto the scene and for the first time tea was a source of artistic inspiration: painters, potters and poets created a sophisticated universe around tea, laden with symbolism. One of them, Lu Yu (723-804 AD), drafted the first treatise on tea, Cha Jing or Traditions of Tea, a poetic work in which he describes the nature of the plant and standardises the methods of preparing and drinking the beverage. "One finds, he writes, in the serving of tea the same harmony and order that govern all things."

Tea then was made of compressed briquettes, which were first roasted before being ground to a powder and mixed with boiling water. Some ingredients were then added: salt, spices, rancid butter…. Tea is still taken this way in Tibet today.

During the Song Dynasty (960-1279 AD) a second school was born that, insofar as the lyricism of its ceremonies and the importance attached to the rules of preparation were concerned, was a precursor to the Japanese Cha No Yu School. The teas used were increasingly refined and fine china began to play a decisive role in the world of tea. The leaves were ground, with a mortar and pestle, to a very fine powder on to which the simmering water was poured. The mixture was then whipped until frothy with a bamboo whisk. Alongside this ritual, reserved for the court, a more widespread consumption of tea was developed, including other social classes. The first unpackaged, loose teas made their appearance and it was therefore possible to meet the growing popular demand.

During the Ming Dynasty (1368-1644 AD) an imperial decree prohibited the manufacture of compressed tea and tea began to be taken in its present form: a brew in a pot. This new way of enjoying tea influenced the artefacts and accessories that were used in its preparation: it marked the beginning of earthenware and china tea sets. The kettle replaced the tea bottles of the Tang era and the teapot became the ideal receptacle to infuse the tea. Tea was being democratized and it gradually gained a following in every social class, enjoying even greater economic success with the start of the export trade.

In Japan tea appeared in the 7th century AD. On repeated occasions Buddhist monks brought tea plant seeds from China and tried to establish a tea growing culture in their country. However, it wasn't until the 15th century that tea was grown all over the archipelago. Sen No Rikyu (1522-1591 AD) was the first grand teas master: with him tea became a religion, an art and a philosophy. These disciplines were expressed through a complex and highly codified ceremony in which the ideal was to demonstrate the grandeur contained in the smallest everyday acts. "Tea is no more than this, he writes, boil the water, prepare the tea and drink it properly."

From the 10th century onwards, tea was an export of primary importance for China: firstly to other Asian countries and then, starting in the 17th century, to Europe.

In 1606, the first tea chests arrived in Amsterdam in Holland: this was the first known cargo of tea to be registered at a western port. The East Indies Company, a Dutch firm, had close links at the time with the Far East and they maintained a monopoly over the sale of tea until the end of the 1660s, even after the creation, in 1615, of the East India Company, an English competitor. In 1657, Thomas Garraway, the landlord of a coffee house in London, introduced tea on his premises and placed an advert in the local paper which read: "This excellent beverage, recommended by all Chinese doctors, and which the Chinese call 'Tcha', other nations 'Tay' or 'Tee', is on sale at Sultaness Mead close to the Royal Exchange in London."

If the spread of tea at first met strong opposition - it was said to cause men to lose height and good humour, while women lost their beauty - it soon became the basis of a very important trade. At first the privilege of princes, it later became the favourite of all the dandies who frequented the "coffee houses", soon to be re-named "tea houses".
Cromwell imposed a heavy tax on tea just before his death, and it quickly became the subject of a thriving contraband trade. In the 18th century its price became more accessible and tea became a revered national drink.

In France the introduction of tea gave rise to numerous controversies, from 1650 onwards, in medical circles. It therefore became extremely popular. In one of her letters Madame de Sévigné mentions that Madame de la Sablière was the first person to add tea to her milk. Racine was a faithful tea supporter, as was Cardinal Mazarin who drank it to treat his gout.

English and Dutch settlers brought tea to the New World, where it was to play an important role in the history of the United States. The commodity was subject to a very high duty and, in 1773, the inhabitants of Boston decided to boycott its import. On the 16th December they threw the cargo of a vessel anchored in the harbour into the sea: it was this "Boston tea party" that provoked reprisals by the British authorities against the inhabitants of Massachusetts which, in turn, paved the way for the events that led to the War of Independence. 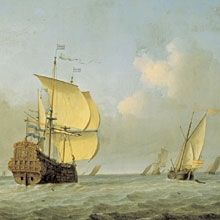 Tea was also the cause of more peaceful confrontations: like those of the " tea clippers ", light sailing ships used to transport tea. In the 19th century the huge demand intensified rivalry between ship-owners: great races took place along the main maritime routes of the East.
The Chinese were the sole producers at the time and imposed their rules: prohibitive prices, limited access to the port of Canton and a refusal to exchange tea for English textiles. To counter this commercial pressure the English decided to illegally introduce opium into China to create dependence - and therefore give them some bargaining power - on the part of their business partner. This was the start of the Opium Wars that would end with Britain annexing Hong Kong in 1842.

By the 19th century China could no longer cope with the ever-increasing western demand and in 1830 the English started to develop tea cultivation in other countries. Tea plantations were started in India in 1834 and in Ceylon in 1857. The Ceylonese plantations at first were purely experimental but, in 1869, after the total destruction of coffee plantations by a parasite, tea became the island's main source of income.

Tea was also planted in other Asian countries that have become important producers; also in ex-British colonies in Africa and, more recently, in Reunion Island and in Argentina.Today, tea is the most drunk beverage in the world after water, we drink about 15,000 cups every second.