Russian conviviality: around the samovar

The first evidence of tea in Russia dates back to 1567: two Cossacks - Petrov and Yalychev - referred to it as a wonderful Chinese beverage and decided to drink it regularly. However, it was not until the end of the 17th century that tea became a staple commodity, being imported regularly into Moscow. For nearly two centuries, tea was only available in this city and remained the sole preserve of Muscovites, who were called in a mocking way by other Russians "tea drinkers" or "hot water drinkers". It was only from the 1850s onwards that tea drinking spread throughout the empire and was taken up by all social classes. 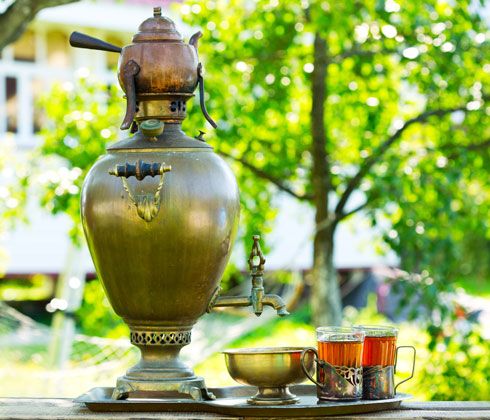 Tea in Russia is inseparable from the samovar. Invented at the beginning of the 18th century in the Urals, this artefact essential for preparing tea was widely adopted at the same time as tea became more accessible. The samovar is a kind of large kettle for making tea which contains several litres of water kept at the right temperature and is also a source of heat around which the whole family keeps warm.

The samovar is made up of a hearth, a large container with its centre hollowed out and a chimney. A wood burning stove is lit in the hearth, which serves to heat the air in the chimney above it: this system allows the water to be brought to and to be kept at a constant temperature. The shape of the samovar is designed so that one can hear the various stages in the boiling of the water: it starts by "singing" then "humming" and finally by "rumbling like thunder". It is when the water hums that it is ready.

A tap, situated on the outer wall, allows cups and teapots to be filled easily. The teapot, in which a highly concentrated extract of tea has been prepared, is placed above the chimney and is thus kept warm. Each person serves himself/herself by pouring a little tea from the pot into a cup and then diluting it with hot water. To cool the beverage, the contents of the cup are often emptied into a saucer and the tea is drunk directly from this second receptacle.

Tea occupies a prominent place in Russian society and has even given the language some of its common idiomatic expressions: a "tip" for example is a na tchaï which means "for the tea". On a social level, getting together for a cup of tea had different functions: starting as an intimate family gathering, it became a social event in which the high society and formal side of things completely masked any warmth and cosiness.

Today, drinking a cup of tea around the samovar means performing a warm and friendly action, similar in function to the original family gatherings, of which one can find descriptions in all 19th and early 20th centuries Russian literature. It is a time of sharing with family and friends, when everyone stops for a minute to feel the warmth and enjoy everyone else's presence.